New reports about the massive explosion that hit the capital of Lebanon, Beirut, yesterday indicates that at least 100 lives have been lost.

A report by CNN states that more than 4000 people have also been wounded due to the shocking explosion that has attracted global attention as the world sympathizes with the Western Asia country. 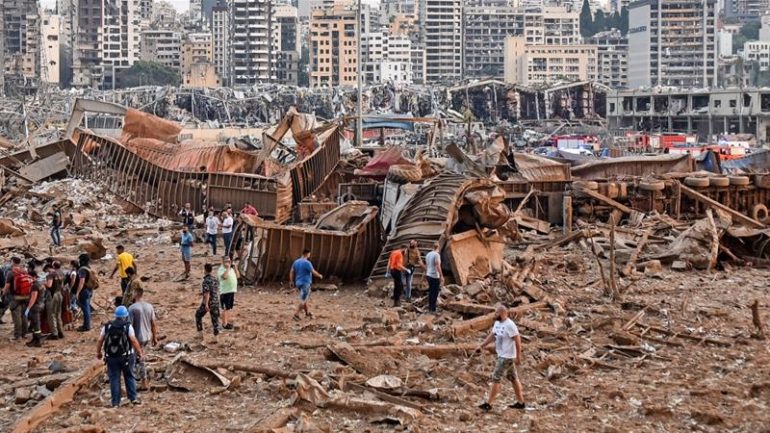 Major General Abbas Ibrahim, of Lebanon’s General Security Directorate, said the massive blast that shook Beirut’s port area on Tuesday was caused by confiscated “high explosive materials” adding that it would be “naive to describe such an explosion as due to fireworks“.

Beirut’s governor said the blast caused up to $5 billion worth of damage. World leaders, including Donald Trump have shared their sympathy with Lebanon with readiness to support the country to recover from the disaster.

See the tweets below for more reactions to the explosion which has seen Beirut’s Governor crying whilst addressing the disaster.

Beirut governer Marwan Abboud literally cries while discussing the massive explosion. One could see the pain and sorrow in his eyes, May all the Lebanese stand strong❤️ #prayforbeirut #PrayForLebanon #LebanonExplosion pic.twitter.com/jehdiF1HfW

"Let me begin by sending America's deepest sympathies to the people of Lebanon." pic.twitter.com/CZitqk2A0S

Lebanese rescue workers are looking for survivors of a powerful warehouse explosion that shook the capital Beirut, killing 100 people and injuring nearly 4,000 in a toll that officials expected to rise https://t.co/eHrv23kWdT pic.twitter.com/rgQnj1VsEX

A clip of a domestic worker with 3 children at the time of the explosion, thank God they are all fine and no one was hurt.#Beirut 💔💔 pic.twitter.com/Fc5J5r1K2d

" whoever calls on the name of the Lord, shall be saved." – romans 10:13#prayforbeirut #PrayForLebanon pic.twitter.com/2mKSfNplmx

#تفجير_بيروت #بيروت_في_قلوبنا let's take a moment of silence and #prayforbeirut and hope that nothing else bad would happen to the world pic.twitter.com/LSFI7MfEeq

In this article:Beirut, Explosion, Featured, Lebanon