Despite receiving a lot of love after crying out for help to pay his rent, Psalm Adjetefio has also been receiving criticism.

Critics have been asking what he made from his acting career and he is responding to them. He says he was cheated financially when it comes to how much he was paid for his role in his Taxi Driver.

ALSO: iPhone 13 Announced; Here Are The Specs And How Much It Will Cost You

In this interview with Ablade TV, he says he was paid GH10 per episode instead of Gh30 per episode. According to him, he was cheated and he only discovered it later.

A few days ago, T.T as passionately called, came out to beg for GH3000 to pay for his rent.

The video went viral and attracted the benevolence of Vice President Bawumia, who gifted him GH50,000 to pay his rent in advance and Gh20,000 as pocket money.

The Greater Accra Regional Minister, Hon Henry Quartey, in a similar fate has also pledged to give a monthly stipend of GH¢1,500 to the ace Ghanaian actor, starting this month, September till 2024 when the eighth parliament expires.

An official statement from the Minister reads “inspired by the positive impact in the film and entertainment industry where you distinguished yourself, I have equally decided to support you with a monthly stipend of GHS 1,500.00 from my Parliamentary salary”.

“I have therefore placed a standing order for the monthly transfers to your account effective September 2021 till the end of my tenure in the Eighth Parliament of the Fourth Republic on 7th January 2025,” excerpts of his letter indicated. 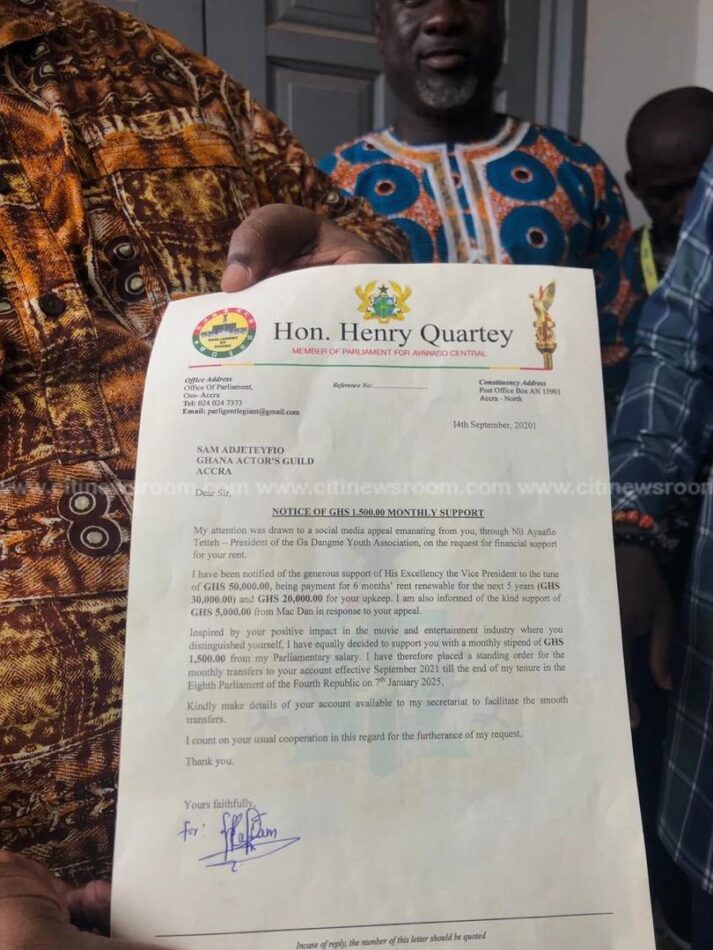