Major flooding has swept through the whole area of Western Europe leaving 120 dead and hundreds more unaccounted for.

The floods have hit countries like Germany, Switzerland, Belgium, The Netherlands and the U.K. Scientists say it is one of the worst floodings to have hit Europe in decades.

They also blamed it on human-induced climatic changes. Rivers and dams have overflown their banks and have caused havoc to the lives and properties of people in the area.

Of all the countries hit with the flood disaster, Germany recorded the highest number of casualties with at least a hundred people reported dead.

NEW 🚨 About 60 dead, dozens missing, thousands out of power after devastating floods in Germany

Vice-Chancellor of Germany, Angela Merkel has pledged government support to the affected residents and their properties.

ALSO: Irina Shayk Turns Down Kanye West As She Refuses His Journey To Paris

She together with the German President, Frank Walter Steinmeier, have called out for an intentional rise against climatic change and the need to prevent the extremities it might cause in the future.

The floods have collapsed many homes in towns in Germany like Rhineland-Palatinate, North Rhine-Palatinate, Ahrweiler and Schuld. 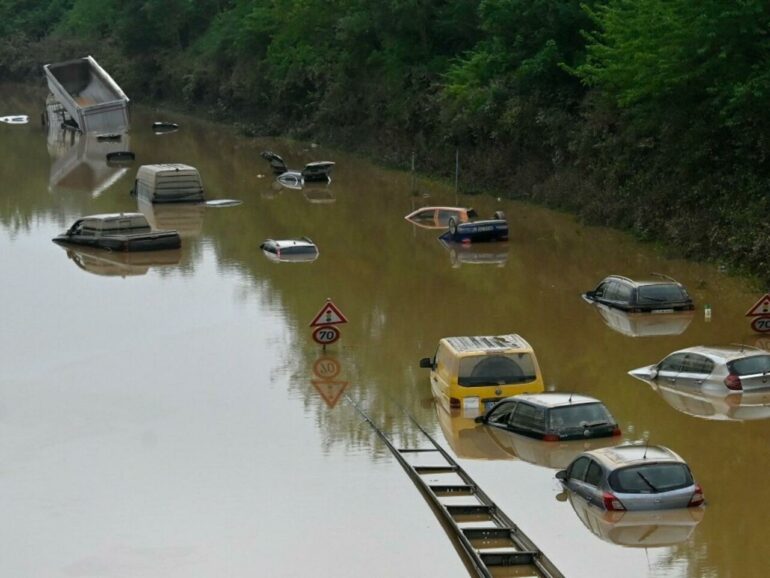 Police and Disaster control taskforces have been deployed to help rescue citizens trapped in the flood. Helicopters are also rescuing people trapped on the roofs of their buildings and tractors are clearing felled trees and debris on these streets.

The Belgian media has also reported about 23 people dead and a village in the Netherlands was completely devoured by the flood. Residents have been directed to vacate their homes immediately.

Live footages of cars being swept off the streets of Belgium were captured and a home for the disabled was destroyed by the floods in Germany. It left many of the disabled persons dead.

On Monday there was flooding also in the U.K but it wasn’t as extreme. According to BBC, Weather forecasters warned against the incoming floods but no seriousness was attached to it.

Scientists have also come out to say the disaster in Western Europe could have been prevented f leaders were more dedicated to fighting against raging climatic by reducing the emissions of CO2   into the atmosphere.

They also added the severity of the European climate will only worsen with more heatwaves and summertime torrential rains.